Spring & Summer are the Perfect time for Residential Stucco or EIFS

For most people, the words stucco and EIFS means more or less the same thing, but it can’t be any farther from the truth. The difference between stucco and EIFS arises from the fact that stucco is a layer of traditional Portland cement plaster while EIFS on the other hand, comes in two different categories, and is an acrylic-based plaster system applied over an insulated surface. Since EIFS is acrylic based which means it has polymers added to it, it is also known as synthetic stucco.

Traditional stucco or stucco, in general, has several limitations which prompted people to distrust it. Stucco requires higher maintenance, but EIFS, a more recently developed and a refined system resolves many of the concerns associated with traditional stucco. One of the major disadvantages of stucco, that is, its high susceptibility to moisture or water damage is addressed by EIFS effectively. As a result, EIFS requires less maintenance. Also, the insulation capabilities of EIFS are an added advantage for homeowners.

With years of expertise in exterior EIFS, we at Zero Defects aim to enhance curb appeal as well as the strength and function of your building envelope. Our detail-oriented and exquisite workmanship ensures that your property’s exterior not only provides superior resistance to the elements but also looks equally good.

While traditional stucco was made of Portland cement plaster and there were no varieties to it, EIFS comes in two different varieties depending on its finish and its constituents.

These two types of EIFS are normally distinguished based on their finish with PB or polymer-based systems corresponding to a non-cementitious finish coat, while PM or polymer-modified systems corresponding to a cementitious finish coat. Although, the terms PB and PM systems have stuck, these days the nature of the finish coat is not the only aspect used to identify the type of EIFS. While EIFS is also known as synthetic stucco as it is acrylic based, traditional stucco, on the other hand, is basically just a type of cement that can even be made by anyone or they can use pre-mixed stucco.

Compared to the three-coat stucco systems of the past, the modern invention of fiber reinforced Portland cement has made modern stuccos a two-coat system. These two-coat systems involve only two coats, a base, and a finish coat as the name suggests compared to the three coats (a scratch, brown and a finish coat) of the systems of yesterday. The modern two-coat stucco systems, also known as one-coat systems in the industry, involve a wire lath attached to a foundation over a weather resistant base. On this wire lath, a base coat approximately half an inch thick is applied. On top of this base coat, a finish coat not unlike the one applied in EIFS is applied which offers a range of color and texture options.

When to apply Stucco? 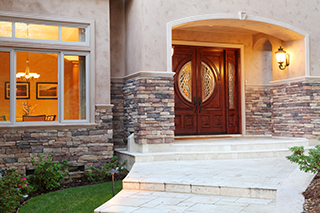 Since stucco is essentially a cement, it requires specific conditions for optimum application since incorrectly applied cement can either dry up too quickly and form cracks or too much moisture can make the cement construction less durable. Stucco should be applied to your home only in certain specific conditions. Although there is no perfect time as such to apply stucco, it’s highly recommended to apply stucco in moderate temperature conditions of 50 to 80-degree Fahrenheit. Cloudy weather conditions are also believed to be idle for working with stucco as direct heat on a  sunny day can make the stucco dry up too quickly resulting in the formation of cracks. But, care should be taken that a cloudy day doesn’t turn into a rainy one as too much moisture can make the stucco-work less stable and strong. It is also essential that after the stucco application is complete, it must be kept at optimum moisture by keeping it damp through frequent misting of water to prevent it from drying too quickly and resulting in the formation of cracks.

While there are many benefits of an EIFS system compared to stucco, most homebuyers opt for EIFS because it is aesthetically pleasing to look at along with having comparatively lesser maintenance requirements than a traditional stucco. Architects or builders, on the other hand, are captivated by EIFS due to the endless design flexibility offered by this system while also being competitively priced compared to traditional stucco. However, one of the foremost advantages of opting for an EIFS system is its insulating potential. By covering almost the entire exterior area of a building, the insulating foundation boards of an EIFS system prevent any energy leaks by not allowing any breaks in the outer insulation of a house; thus, increasing the energy efficiency of the house by reducing heating or cooling costs.

Get in touch with the team at Zero Defects today to schedule your no-obligation consultation or book an exterior stucco project with us. Contact us to learn more or to request a free estimate.